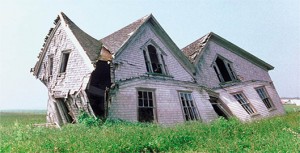 I was just talking to someone today and it was about how sometimes you get pushed into doing things that you don’t want to do. Somehow the topic went on to off-the-plan purchases and then this person was telling me a story about her very first purchase some 6 years ago.

She had signed up to purchase an off-the-plan purchase apartment – one among the five built. Apparently, the builder used her loan to complete the rest of the four! She didn’t know about it then.

When she moved into her (imagine how exciting moving into a first property you’ve purchased), the nightmare started. She moved in and the electricity was not working – so didn’t the gas. The knobs were all there – but when she turned them on – nothing happened!

Two days later, her friends and she realised something – the toilets and sinks were not sealed. When she called the builder to ask about it, the answer she got was that she had not requested them to seal it all! This after the builder had got an occupancy permit!

After three months of arguing, she was over it. Being single, her father then had to intervene and take the matter to VCAT to get it all fixed. To cut a long story short, the attitude of the builder towards her was simply not acceptable.

This has put her off against buying any more properties at all.

Do you have a similar nightmare story to share having used a small builder?

It has come to our notice that people are receiving calls from scammers pretending to call on behalf of Smart Money Solutions. WE DO NOT COLD CALL to promote our services or to ask for any personal information. If anyone is calling and pretending to represent Smart Money Solutions, please DO NOT respond. We have reported the incident to Police and also registered as a scam with scamwatch.gov.au.